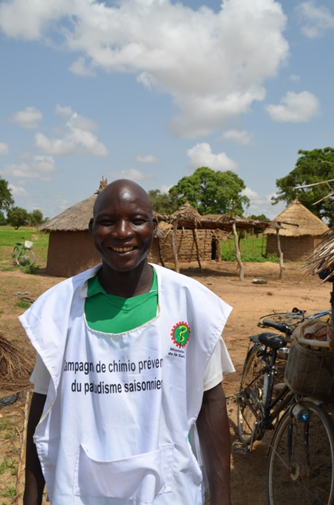 “The CHWs are the people who bring the medication to the children. We are counting on them to ensure that fewer children fall ill with malaria this rainy season,” says Malaria Consortium’s Dr. Eleonore Fosso Seumo, Country Representative, Burkina Faso, as she explains that the role of the CHW is crucial to the successful implementation of the SMC campaign.

Making their way along the orange dusty tracks, Boulsa’s CHWs are easy to spot with their white tabards and kit bags. Their day begins at 6AM when they meet at the Community Health Centre to receive their supply of SP+AQ. By bike, they make their way in pairs through the fields, stopping to distribute the preventive SMC treatment to eligible children.

The role of the CHW is multifaceted: they must communicate effectively with parents, reassure the children and signal any problems and adverse reactions to their supervising health facility worker. All of the CHWs are volunteers who work four days each month over the course of the rainy season to ensure that all eligible children benefit from this preventive treatment with the aim of reducing malaria incidence.

25 year old Ipala Zidwemba is a CHW, working for the first time to bring SMC treatment to eligible children in the village of Gaouga, Boulsa. A maize farmer by trade, Ipala has always lived in Gaouga. He explains that participating in this campaign is very close to his heart having suffered, like the majority of Burkinabés, from malaria at several points in his in life. “We have all had malaria at one point or another, some are lucky but others are not and that is why it is important that we protect the most vulnerable who are the children under five years old,” says Ipala.

While Ipala is hopeful that the SMC campaign will have a positive impact on malaria incidence rates, he recognises that there are several obstacles to the successful delivery of this intervention.

Ipala explains that carrying out an SMC campaign is not easy like other campaigns, such as like the polio vaccination campaign. He explains that administering the polio vaccination consists of squeezing a couple of drops of a sweet tasting liquid into the children’s mouths and within a few seconds the medication has been administered. SMC is different. Before even giving the child the treatment, the CHW must first ask a number of questions in order to establish whether the child is healthy and eligible to receive the first dose of SP+AQ. Once the CHW has determined that the child can receive the treatment, a lengthy preparation process ensues, involving the crushing of drugs and mixing with sugar and water. Due to the bitter taste of the mixture, this is often rejected by the children, particularly by the younger children. In this instance, the CHWs must wait another 10 minutes before attempting to re-administer the mixture. “We really need medication that is adapted to be given to young children and in the conditions that we are working in,” says Ipala. He continues explaining that, once the children have been given the medication; each pair of CHWs must wait 30 minutes to observe whether there are any adverse reactions. Once everything is completed, the paperwork has been filled in and the parents have been shown how to give the remaining doses, they mark the house to show that the children have received the SMC treatment, finally staining each child’s finger nail with a permanent marker, to show that they have had their first dose of SP+AQ. “All of these things make the administration of SMC a lengthy and complicated process!” concludes Ipala.

In addition to problems of administration, the CHWs must also contend with the rains. The nature of the SMC campaign is that the treatment is given each month of the rainy season, as during this time there is an increased risk of malaria. However, with rains come floods which make the work of the CHWs even more complex.

“To ensure maximum coverage and successful roll out at scale of the SMC campaign, it is essential that we develop ways to overcome these obstacles,” Dr. Savadogo Yacouba, NMCP, Burkina Faso.