Addressing systemic social drivers that can limit the scale up of SMC: cases from Guinea and Niger

There has been a broad acceptability of SMC across countries supported by Catholic Relief Services (CRS) over the two year implementation period. We have learned it is critical for National Malaria Control Program (NMCP) and health systems implementing SMC to understand and be able to respond to socio-cultural drivers that may inhibit acceptance of SMC in communities and households, limiting the coverage of eligible children. In the cases of Guinea and Niger, both countries are interesting examples of how responding to socio-cultural dynamics that drive demand of SMC, whether in the design stage (Guinea) or during implementation (Niger), is critical to the success of scaling up SMC in the Sahel.

Remarkably in Guinea, during the height of the Ebola virus disease epidemic in 2015, there was near universal acceptance of SMC among communities and households. While in the fourth cycle of the 2015 implementation of SMC in Niger, the NMCP responded to low coverage data by switching to the door-to-door method for administering SMC in the city of Maradi. This triggered a shift from 14 percent coverage in the third SMC implementation cycle to 88 percent coverage in the fourth. Subsequently, socio-cultural acceptance issues of SMC were addressed in both Maradi and Zinder by changing the way SMC was delivered in 2016. 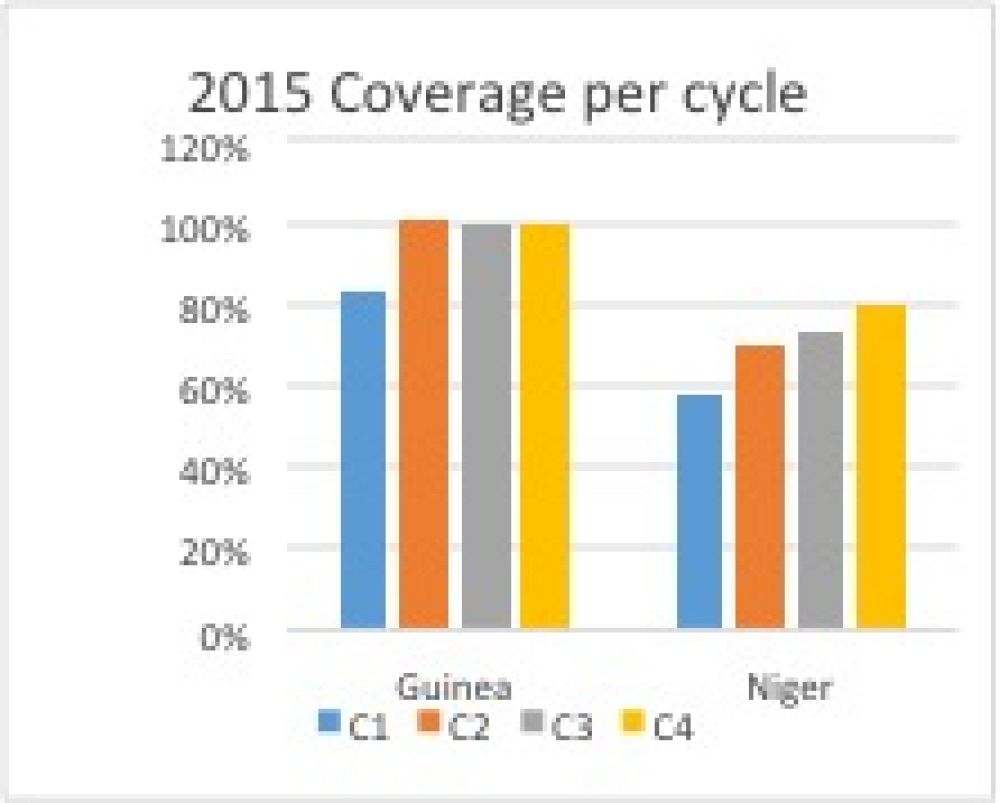 Though caregivers rejected the health system in Guinea, they were accepting of SMC. This was because while designing ACCESS-SMC the NMCP understood that confidence, based on utilization rates of the health system, facilities in particular, was at a historic and dangerous low. Consequently, malaria and other diseases were going untreated, and in many cases there were increases in the number of people contracting diseases. The NMCP used this knowledge while designing the project to create a community care model, utilizing a door-to-door delivery modality to manage socio-cultural acceptability challenges. SMC coverage rates would have been negatively impacted if the administration of the treatment were arranged at fixed health facilities.

The cultural dynamics in Maradi and Zinder created a systematic blockage in reaching a signifiant number of eligible children for four cycles of treatment during the 2015 SMC implementation. In Niger, women have limited mobility outside of the home, which resulted in the majority of caregivers unable to bring their children to the fixed, mobile distribution sites in Maradi and Zinder, two urban districts in a largely rural country. Based on broad community engagements by NMCP and ACCESS-SMC partners, it was clear that if the SMC treatment were made more accessible then acceptability, and therefore coverage, would increase in Maradi and Zinder. NMCP responded with testing the door-to-door modality in Maradi during the fourth cycle in 2015. Instead of nine fixed distribution sites, there were 145 two-person door-to-door distribution teams. This was scaled up to include Zinder in 2016, which resulted in overwhelmingly positive results, as shown below. 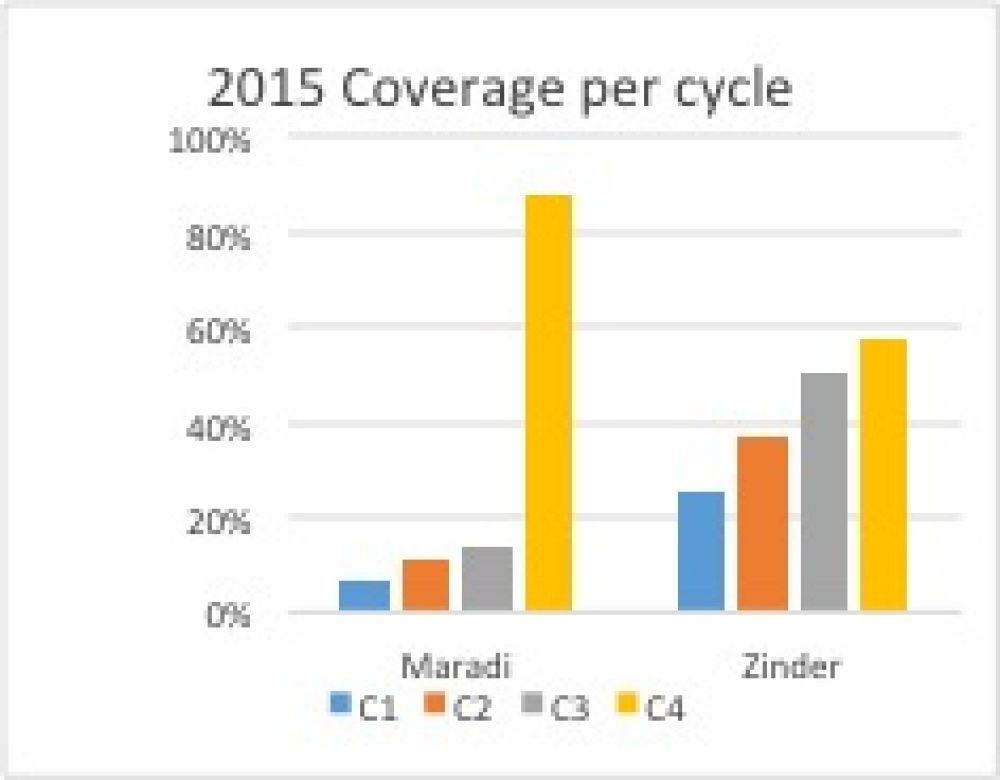 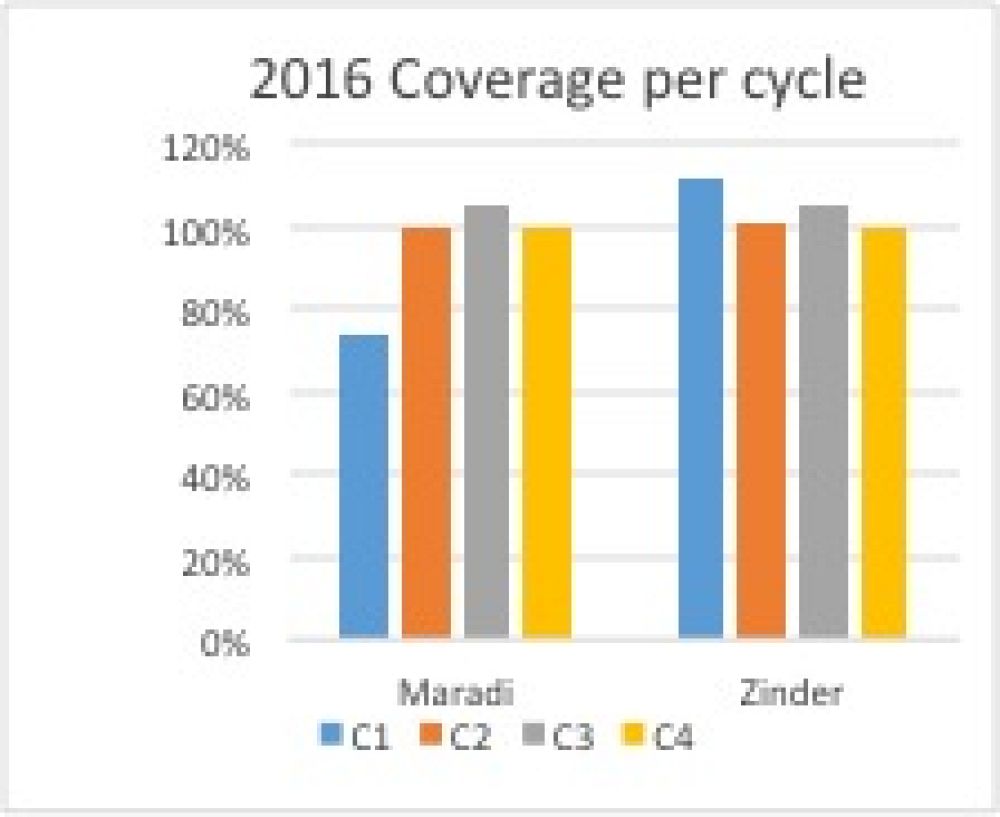 The lessons from Guinea and Niger demonstrate that simply making drugs available does not mean communities and households will accept them. There is a close link between accessibility and acceptability of services that should be addressed at the design stage, which is driven by socio-cultural contexts that can vary dramatically and must be considered when implementing or scaling-up SMC. Without being able to understand and respond to socio-cultural drivers that would inhibit the acceptance of SMC, a large number of eligible children will miss out on the benefits from taking this life-saving treatment.